So Straight after finishing up my Confederate Cavalry Rob dropped off his first couple of union units for me to paint up. I decided since i was having fun with horses id start on his cavalry unit.
This would be fun as Rob had assembled them all with hats rather than caps like i had and with a different uniform colour it would be interesting to see how the same box can cover both sides of the conflict. 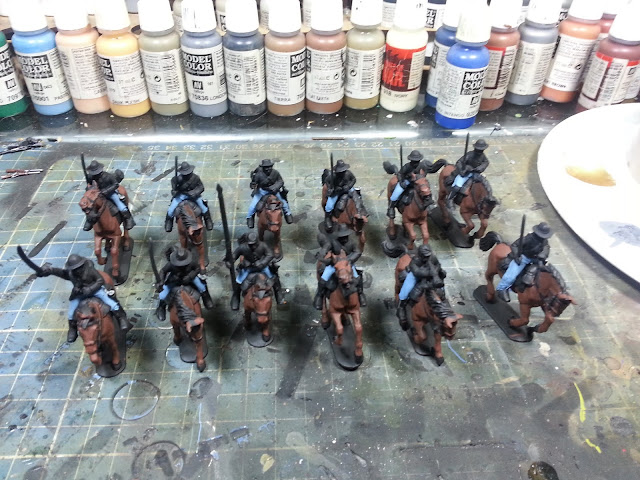 As the union had a lot more resources and tended to be more uniformed than the confederates i decided to do all the horses in the same base colour. I will have verity in the unit by doing different placings for the horse markings etc.

Along with the cavalry the second unit of Rob's is a infantry unit.  I've noticed the the Perry's first plastic box has slightly shorter troops than the newer confederates. This isn't a big issue as they will be on the opposite side of the table as my troops but i can see why people on various sites and forums are asking for a new union specific set to be done by the Perry's. (it would be great to see a set in full coats).

I'm hoping to have both units done by the end of the week.
Posted by Kiwicolourstudio@gmail.com at 3:47 AM

Email ThisBlogThis!Share to TwitterShare to FacebookShare to Pinterest
Labels: Federals (Union), On the painting table

Mighty Ape - Where i buy most of my toys from and so should you!!!