So whilst ive been slowly working on figures ive been giving some thought to terrain themed specifically to the American South. Cornfields and Cotton fields are the first two things that come to mind closely followed by wooden fencing.  I've decided to tackle corn fields first.

I looked everywhere for different options. From ways to make it yourself to commercial options nothing was good value for money for how many i need to do larger fields - then i found these!!! 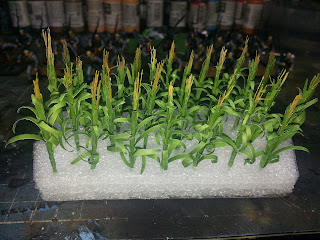 They are made by a company called JTT Scenery Products.  Available all over e-bay for about US$ 6-7 a packet which contains 28 individual corn stalks (as seen above). (the link is below to the seller i used - very fast prompt service and im definitely going to be using them again!.

So with corn stalks in hand i had to decide how to use them.  I've decided to mount them on 40mm x 40mm bases so that they are the same size as an infantry stand so that as units move through the fields the bases can be rearranged etc..

The next pic shows off the height of the stalks and the way im looking at doing them 5 stalks to a base. The stalks are 2" tall and i think look about right next to an infantryman. (Maybe a little tall been a long time since i was in a corn field last and i was only a lad back then so everything seamed taller).  Checking with a couple of my war gaming mates that actually come from America and are big ACW fans they seem to think that the height and spacing look about right - so that's good enough for me!! 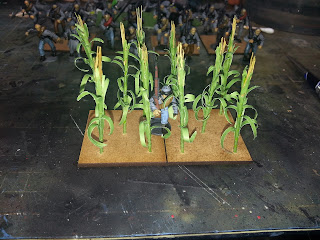 And here is what 6 stands worth (one pack plus two extra stalks) look like: 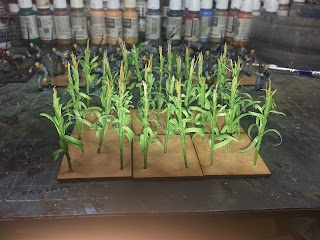 In part two i'll do a step by step on how im going about basing them.

So what do you guys think - good product or not worth the money and better to make corn stalks yourself? For me time saved is worth the money and personally for NZ $10 these things are awesome - even if i am going to end up spending several hundred dollars on them to do some big fields.

Keen to know what you guys think.

Posted by Kiwicolourstudio@gmail.com at 1:58 AM

Mighty Ape - Where i buy most of my toys from and so should you!!!